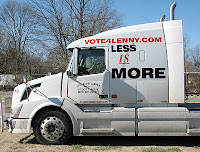 Another weapon in the arsenal of liberty. This message on my truck. I hope you like it.

"Less Is More" is another con game that is being perpetuated on the citizens of these United States.


They resolve their differences and the increase is 35 Billion dollars.


This was the agreed upon figure before any debate started.
And this stratagem was understood by both parties before any proposal was made:


In George Orwell’s language this is the accomplishment of expanding government behind the phrase, “Less Is More”:: LESS IS MORE!!!


This strategy is always used on every bill to increase the size, cost, reach and power of the bureaucracy.

Decreasing The Increase another part of the concept of Less Is More.

The solution to this and other problems is to have the House of Representatives cut the funding for the government in the reverse fashion that it was expanded.


Oh, if you see my truck on the road I would appreciate a thumbs up.

Back
Posted by Lenny Ladner at 3:10 PM