The Strangest Political Letter You Will Read


Can I have a moment of your time?


This is going to be the strangest political letter you have ever received.


The reason why is unlike all the other letters you are receiving
I'm not going to ask you for any money.


Isn't that interesting. It seems every other letter is written by a
candidate for office that is telling you they are running against a BOOGIEMAN and if they don't defeat the BOOGIEMAN our beloved United States will go down the drain.
(It has been going down the drain since 1865).
Of course your contribution will go a long way to stopping the BOOGIEMAN.


Now let me introduce myself. I'm Lenny Ladner. I'm an ordinary guy. I own and operate an eighteen wheel truck for a living. 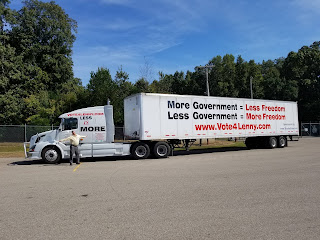 I'm running for the House of Representatives in Tennessee's Seventh
Congressional District as a straight Independent.

This way the voters have a choice in November.


Now my entire platform is the following:


I will base my vote on any bill. Whether it's on the floor of the
House of Representatives.In a committee. In a sub-committee or in a thinly attended caucus (and this is where the bills of funding are assembled). By a question. This is a question I would like you to adopt.


“If this bill passes, will it increase the size, cost, extend the reach or power of the government?”


If any of those conditions are met then I WILL VOTE NO ON THAT BILL. Because we have too much government now. Why would anyone in their right mind want more??????


Now if you were running for office, isn't that what you would do????


Now I'm not asking you for any money but I need your help.

“If this bill passes will it increase the size, cost, reach or power of government?” in your own words.

Or ask it when discussing political candidates. Like, “Why are these politicians always advocating increasing the size, cost, reach and power of government as solution to our problems?”


Now my other request is that you forward this letter to twenty five of your friends.


Thank you for your time.


Candidate, US House of Representatives


PS. If you wish to discuss the issues please feel free to contact me by email.


PPS. The biggest problem we American's face is this continued growth in the size, cost, reach and power of government.


PPPS. Think about running for any Legislative position,
City Council, County Commission,State Representatives or Member of the House of Representatives.
If you are willing to VOTE NO on any legislation which increases the size, cost, reach and power of government. You are qualified.
As a matter of fact more than qualified than the incumbent idiot who is “representing” you.


Posted by Lenny Ladner at 6:33 PM No comments: