I want to talk about a gentlemen who I met a few weeks ago in of all place
Half Moon, NY. , which is a suburb of Albany, NY. (A real citidel of liberty!)

Mr. Stiles who has been a farmer all of his life.  He also owns a gravel and mulch business and actually has a turkey who keeps watch on his property.

Hats off to you “Turk” You are too good to be on anyone’s plate.
What attracted me was this sign on US 9. 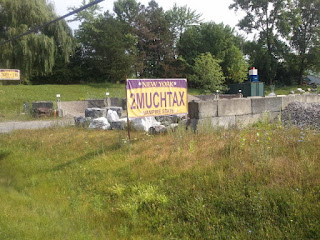 Basically Mr. Stiles goes around and tries to educate his neighbors that taxes are too high.

He is absolutely correct on this issue.

However what Mr. Stiles doesn’t understand is how some of these slippery slick slimy politicians can put a hole in his balloon very quickly.
They can destroy his argument with the following words.

“Tell me where taxes should be Mr. Stiles???”

That will cut off any debate on the issue.  Politicians and elitists win, we loose, again.

This is similar to what went on in the 1950’s when a Senator from Ohio by the name of JohnBricker  realized that our country was being destroyed through international treaties.
Senator Bricker decided to do something about it and proposed an amendment to the US Constitution which basically said that all proposed treaties have to be in line with the US Constitution.  This became known as the “Bricker Amendment.”

The “Bricker Amendment” went viral.  Many citizens bought literature and set up ad-hoc committees to get this thing passed.  The firestorm that was gathering against the Collectivist Elitist Establishment was becoming too much for our unelected leaders to bear.

Anyway what they did is to send Secretary of State, JohnFoster Dulles (and I really suggest you read my late friend Alan Stang’s book called “The Actor.”) to speak in front of a group of lawyers.  Mr. Dulles then dropped a bomb which destroyed Bricker and his amendment.  The bomb was the following statement, “All treaties are in line with the US Constitution.”
Bricker and his amendment was DOA.

“Gee Congressman Shitforbrains.  I understand that we in these United States have a lot of problems.  Why is it that you and every other slippery, slick, slimy, traitorous politician has the same solution to these problems?

Why are you advocating an increase in the size, cost, extending the reach and power of the government as a solution to this and other problems?
We have too much government now why do you want more?”

That question will kill off any comeback by a politician.

Now let’s create an atmosphere of terror.  Let’s terrorize each and every politician and ask that question.

If you want to fight now is the time.

The Question That Will Save These United States

Congratulations on winning the Democratic Party’s primary for the US Senate in Tennessee.

Now if you want to beat Bob Corker you have to give the people a reason to vote for you that he and the other opponents can’t stand on.

Mark, this is a real simple deal and you can do it.

Tell the people that you will look at these bills that are being proposed and you are going to ask a question on each and every one of these bills.  That question is rather simple and it is,

“If this bill passes and becomes law will it increase the size, cost, extend the reach and power of the government?”

If said bill does any of those things you will VOTE NO for those reasons.

If you do this you will DESTROY Bob Corker.  You might even win the election.

Best of luck and VOTE NO on any bill that increases the size, cost, extends the reach and power of the government.

www.vote4lenny.com
Posted by Lenny Ladner at 7:30 AM No comments:

A Choice In Massachusetts????

I understand that Senator Scott Brown and Elizabeth Warren are in a neck and neck race for the US Senate in Massachusetts.

The way to attack Elizabeth Warren is to ask her this question.

Put this question on her web site.  Send it to her as an email.  Better yet confront her with this question in person.  The results will be devastating.

“With all the problems that we have here in these United States, why is it your answer to these problems is a one size fits all solution.  Increase the size, cost, extend the reach and power of the government.  Why are you advocating more government as a solution to our problems????  We have too much government now.”

The other thing that is important about the Elizabeth Warren Scott Brown race is very simple.

The real powers to be.  You know that group that I call the Collectivist Elitist Establishment Scum.  They control the candidates that you can vote for.

Now they want Scott Brown reelected so they put up an extreme wacko leftie to run against him as a Demo-Crap.  This is the lesser of two evils strategy.

In this case it doesn’t matter who you vote for.  You will still get a stooge who will increase the size, cost, extend the reach and power of the government.

Elizabeth Warren has a track record with her statements.

Scott Brown has a track record with his voting record.

Now let me tell you about a little race for Congress down home in Tennessee.
You have a five term incumbent Neo-Con-Congresswoman who lied (well politicians do that quite well) her way into her present position.  This Republi-Con Congresswoman stated in 2002 that she would VOTE NO on any bill that will increase the size, cost, reach and power of government.  The voters believed her.  Were they fooled.

Her put up opposition in this race is a fellow who was born in Togo which is in Africa.
This opposition which was put up by the Demo-Crap party is another sheep being led to slaughter.  The Demo-Crap party has no intention of trying to win this race and has been told by the real rulers of These United States to put up a weakling because said five term incumbent will do what she is told.

Now let’s throw a wild card into this race.  A very patriotic trucker (Lenny Ladner) who will not do what he is told but will ask a question on the floor of Congress.  Ask this question in a committee, sub-committee or in a caucus.

That question is devastating and will cause quite a few heart attacks with this group of elitists.

The question is very simple.  You can even ask it in polite company.

“If this bill passes will it increase the size, cost, extend the reach and power of government?????”

Said challenger will also VOTE NO on anything that increases the size, cost, extends the reach and power of government.

Now if you live in the Seventh Congressional District in Tennessee I need your vote and your help.  Please click here.

Now if you don’t live in the Seventh Congressional District in Tennessee you may not be able to vote for me but if you agree with me please spread this story around. Please click here

If you are sick of the growth of government and we are now on the verge of a dictatorship.
Please get my message out.
www.vote4lenny.com

Or you can continue this geese are swans and swans are geese debate with each and every Scott Brown or Elizabeth Warren.

If you vote no government can’t grow.

www.vote4lenny.com
Posted by Lenny Ladner at 6:13 PM No comments: